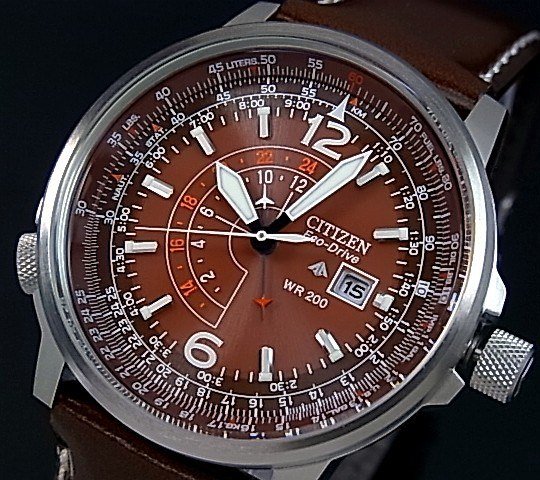 The Citizen Watch Co is one of the best-recognized names in Japanese and world watchmaking. Focusing primarily on quartz-based watch movements, it is also recognized as the parent company of the American-based watched company Bulova. Watch enthusiasts recognize the brand as a low-cost manufacturer punching above its weight in terms of quality in the quartz movement market. Put another way, there’s a lot of shoddy watches in the $100-$300 range, and Citizen stands out among them all.

Some of the most popular Citizen men’s watches are their sport and aviator lines, which feature busy dials and feature-rich complications such as dual time zones, alarms, radio synchronization, and other professional tools all on your wrist. These are collectively known as the Promaster series, but the individual models in this bucket are varied. Few watches carry a moniker like the Omega Speedmaster or Breitling Navitimer as most simply go by their model name, like the Seiko SKX007 or the SRP775. However, the Citizen Promaster watches have affectionately garnered unique monikers that also apply to various sub-models. Specifically, these are the Citizen Nighthawk, Citizen Navihawk, and Citizen Skyhawk series watches. What is the difference, and which  are the most popular? This is covered in this article.

Perhaps the most popular Citizen watch of all time, the moniker “Nighthawk” frequently refers to the black-dial version of the BJ7000-52e. This watch stands out for many reasons, primarily the excellent value for the money in terms of build quality and bracelet construction. The most impressive feature of the Nighthawk is the slide-rule which can be manipulated via the eight o’clock crown which will turn the inner chapter ring for in-flight or pre-flight calculations. While you won’t really use it for these purposes, its still quite a lot of fun and very eye-catching.

Other reasons for the popularity of this watch include the unique dual-time / GMT functionality at the center of the dial. The crowns are gnarled and well-finished, the bracelet has solid end-links, and the watch boasts a 200 – meter water resistance which is quite impressive for a pilot’s watch. The crystal is made of mineral crystal, which is prone to scratching but not to shattering. It’s hard to find a higher quality watch for the money.

Due to its popularity, the Nighthawk has over fifteen variations in dial color and case construction depending on the local market. One of the more common favorites is the variation in blue:

Another variant is the Havana which features a coffee dial and theme, although it is incredibly rare to find.

Variations like the mesh-bracelet (BJ7008-51E ) have been discontinued, but are hardly missed:

The Original black Nighthawk design is a winner and is likely here to stay.

The Nighthawk chronograph is another favorite which features the word “Nighthawk” directly on the dial. This watch takes advantage of the current trend for a stealth-style mission-type blackout watch. Unfortunately this makes it quite a bit less visually eye-catching, and it gives up many of the favorite features found on the original Nighthawk, such as the slide-rule, GMT/dual-time functionality, and the black-and-red aesthetic. The main feature in common is the case and bracelet – although it does add the increased functionality of a quartz chronograph – useful for measuring elapsed time.

Many owners find that it requires quite a bit more time to study the dial before discerning what time it is, which is not ideal in a flight situation. Readability in those conditions trumps stealth, yet one ought to consider the Special Operations components of air missions, like the famous/secret 160th SOAR (Special Operations Aviation Regiment) which, among many missions, famously transported Seal Team 6 to the Bin Laden raid. The nickname of this regiment is the Night Stalkers, which bears notable resemblance to the Nighthawk moniker. In this sense, it is like a SOAR-themed watch.

Taking advantage of the useful tool watches they create, Citizen boasts the aesthetic of the US Navy’s elite flight demonstration squadron on special editions of their popular watches, including the Nighthawk. This variant is the same as the black dial, but instead of “Nighthawk” on the dial, it reads “Blue Angels.” Furthermore, the color scheme is changed from black and red to yellow and blue and the caseback features the Blue Angels logo/crest.

One of Citizen’s newer Nighthawk models (albeit not bearing the moniker on the dial) is the flieger-style BX1010-11L. Featuring a similar aesthetic to the blue angels theme (blue and yellow color schemes), this world-time watch has a very attractive reflective blue dial and classic styling.

This Nighthawk allows for easy tracking of the time in another city, and extremely legible reading. It features a date window and an impressive 200m water resistance, which, again, is quite impressive for a pilot’s watch. Typically available on a leather strap, we can expect more variants of this increasingly-popular model from Citizen, perhaps in black or with a bracelet variation.