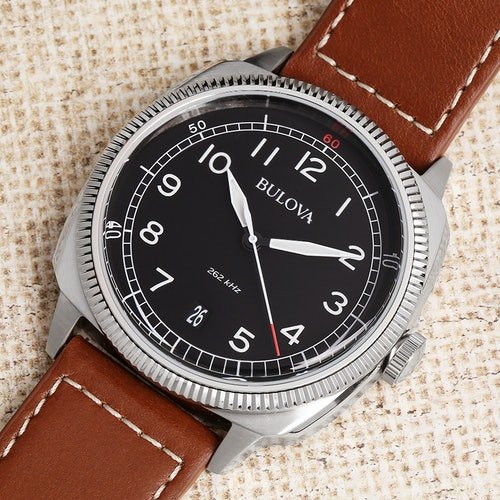 Bulova has been innovating the quartz movement for decades and has been releasing avant-garde watches that feature a sweeping second hand in a battery-powered watch. Traditionally this engineering element was found only on mechanical watches due to the power requirements of the movement.

Although the company has limited information on the differences in accuracy and power consumption of each collection line, the beauty of the technology is seen in common in their Precisionist, 262 kHz, and Ultra-High Frequency (UHF) watches, terms which are often used interchangeably (they’re close enough for most people). Below you will find the best Bulova Precisionists and sweeping second hands watches available by Bulova.

Bulova has come up with new names to describe their technology – some of them overlap, and others have changed over time. Here is a basic overview:

This is the quintessential black Bulova Precisionist, presented with uncommon elegance and simplicity. The gnarled spiral texture of the dial is mirrored with a gnarled crown; the indices lie in classic bar shapes afloat on concentric circles that serve to mesmerize the viewer with the perfectly-sweeping seconds hand that goes around and around. The seconds hand also has a subtle infinity sign on the tail to denote infinite smoothness.

The Bulova Moon Watch has a real pedigree for walking on the lunar surface as part of the Apollo 15 mission, worn by astronaut David Scott. While the official NASA space watch has been the Omega Speedmaster from the beginning, various other watches like the Bulova Moonwatch have also traversed the astral body. This Bulova has been re-released for the 21st century aficionado at a much more affordable price point than it’s Swiss Made cousin.

This chronograph features a sweeping-hand chronograph, and a 2 beat per second hand on the time-tracking subdial.

More in line with most of Bulova’s offerings, the 98B152 is a monument to modern fashion watches and modern technology. Presented in a rose gold case and textured carbon fiber black dial, this Precisionist demands attention at any cost. Featuring a robust 300m water resistance, it has the makings of a dive watch were it not for the fixed (indeed, hex-screwed) bezel and non-luminescent seconds hand; however, we do get the mesmerizing full sweep on this 262 kHz Precisionist model. Doubling down on the dive watch aesthetic, the 98B152 has a rubber strap and a screw-down crown. Additional details include 24-hour markers at the center dial and a date window showing the current, yesterday’s and tomorrow’s dates simultaneously.

We will include the Bulova CURV watches here since they are marked as a 262 kHz movement. The appeal of this watch is the innovation Bulova has used to create it – it is the world’s first curved chronograph movement. While that is impressive, I would be more impressed if they actually kept the seconds hand sweeping. Instead, they got rid of the central seconds hand altogether and gave the seconds sub-dial a dual function. While the innovation is grandiose, I believe the execution can be better.

Taking their craft to the height of fashion, Bulova positions the Champlain Chronograph against such beasts of the watch industry like Breitling, G-Shock, and even Invicta; Bulova is able to offer this piece with familiar styles yet with the addition of revolutionary technology like the Precisionist sweep, 12-hour chronograph with 1/1000 second accuracy, 300m dive resistance, and some truly robust fashion elements. Bulova boasts that the 98B228 is accurate to 10 seconds a year – quite impressive even for a quartz watch. Ideal for those with huge wrists.

Leaving the best for last, the reflective blue dial of the Precisionist 96B257 probably makes it the most appealing of Bulova’s currently available selection. Sporting skeleton hands with tipped lume, as well as a concentric dial design, this Precisionist is a hybrid of a sports watch and a dress watch. While the leather strap is nothing to write home about, you will be captivated by the smooth sweep of the second hand and wonder why all Bulovas don’t come in such a reasonable size and case. Indeed, for the Bulova Precisionist, the 96B257 sets the standard and is (unfortunately) never exceeded.

Bulova is quickly being known for the Precisionist and 262 kHz UHF watches, yet many fail to captivate traditional watch audiences due to their predilection for being overly-gigantic and gaudy. However, Bulova is catering to a specific consumer market that would likely be buying Invictas and Diesel watches instead.

Since their buyout by Citizen Watch in 2008, Bulova has laid their trajectory at the consumer market that is looking for affordable hi-tech fashion accessories while perusing in Macy’s or Kohl’s. While we may desire for them to put this innovation to use in haute horlogerie, the brand’s market positioning is at the low-end of Citizen’s offerings; they will stay there in order to provide greater diversity for the parent company in terms of market segments. From time to time, however, quality Precisionists do come on the market very briefly – like the famous Accutron or the now-discontinued Military UHF 96B230.