The Caliber NH35 (also known as NH35A) is one of the most popular movements on the market that you can buy. The NH35 is essentially a non-branded version of the Seiko Caliber 4R35, but with much more accuracy. It’s a popular choice for modders and hobbyists as an affordable-yet-reliable movement with decent specs.

“NH35” and “NH35a” refer to the same caliber and are used interchangeably.

Accuracy is a tricky topic because it’s subjective from individual movement to movement. Time Module (TMI), which manufactures the NH35, specifies that the caliber is accurate to

When a manufacturer states the accuracy range of a movement, this typically refers to the rating, but watches are almost always more accurate than that.

Owners of NH35 watches report extreme accuracy in the first day (+1 second) down to -10 seconds towards the end of the initial power reserve. While impressive, extreme accuracy is common in new watches, and you should really measure after a year or more of “breaking in” time. Over the long term, users typically report an accuracy in the range of +/- 20 seconds per day, which is very similar to what users report of the 4R35.

Watches with the Caliber NH35a Movement

Since the Caliber NH35A is so cheap and easily obtainable, many watch brands use it as the main workhorse movement in their lineup. They are primarily used by lower-priced microbrands. More expensive microbrands justify their price by using a Swiss ETA movement.

Here are a few brands known to use the NH35: 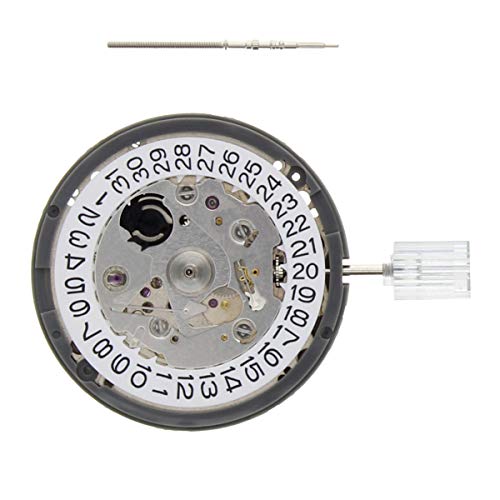 The NH35 is commonly known as the “unbranded 4R35.” The 4R35 is the official Seiko movement, while the NH35 is produced by Seiko Instruments Inc. (SII). The NH35 movements are more commonly available for purchase, and are much more affordable. The main difference is that the NH35 is much cheaper and more accurate than the 4R35, and is therefore a preferable choice, all else considered.

However, when people compare the two, they typically say how much more accurate the NH35 is. This is an unfair comparison because their Seiko 4R35 watches are much older and have had their breaking-in period. Ultimately, the accuracy of the 4R35 is very similar.

Watches that use the 4R36 (date) movement include:

Watches that use the 4R36 (day-date) movement include:

The Miyota 9015 is a popular choice for watches due to it’s smaller size, hacking + handwinding capabilities, and having a higher-beat movement (28,800 bph). In addition, it’s much more accurate than the NH35 at -10 / +30 sec/day.

Miyota is made by Citizen Watch, and is their movement house. They supply movements to independent watchmakers, and may be as widely-used as SII’s NH35.

The Seiko caliber 7S26 is one of Seiko’s cheaper movements, and is far outclassed by the NH35. Seiko only uses the 7S26 in their cheapest automatic watches, usually the Seiko 5s.

Notably, the 7S26 has a slightly worse accuracy than the NH35, and also doesn’t have hacking or hand-winding. While it has served as a reliable workhorse movement until recently, it’s now time for Seiko to use a more modern movement, and the NH35 is a good start.

Watches that use the Caliber 7S26 include:

The 2824-2 is one of the most recognizable Swiss movements. It comes in many different grades, and many watch manufacturers will tweak it and call it a proprietary caliber; as such, it is considered a base caliber that is often modified and decorated.

Not only is the 2824-2 more accurate than the NH35, but it’s reliable from the perspective of staying close to its specifications over the long term. As the most common Swiss movements, it is the cheapest to Swiss movement to service.

A standard grade 2824 movement is adjusted in 2 positions, while the NH35 is not adjusted. This makes it less likely to be regulated too accurately.

The Invicta Pro Diver uses the NH35A movement in it’s automatic model 8926OB. This watch has a clear caseback, and the distinguishing thing about it is the yellow Invicta rotor, which reads:

A lot of people love to hate Invicta, but sometimes they add nice details even when they didn’t have to. The decorated NH35A movement in yellow is one of those details.

Furthermore, consider that the price of the Invicta 8926OB is just $40 more than the movement itself… and that this includes the movement. If nothing else, that speaks to the good value of the automatic Invicta Pro Diver.