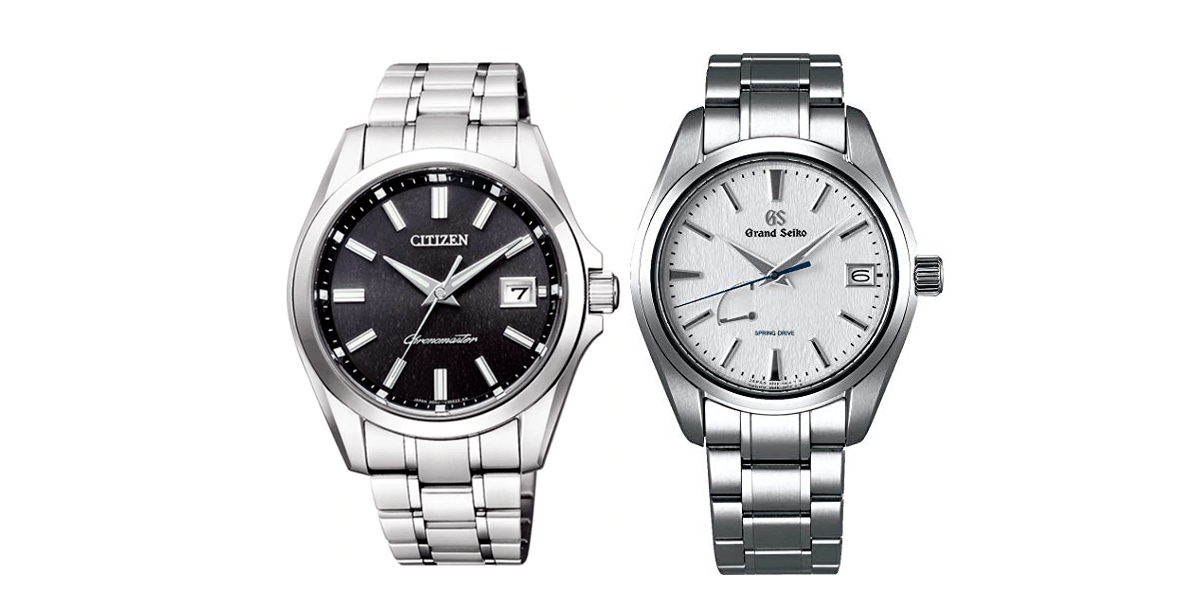 Both Seiko and Citizen are beloved Japanese brands with a reputable history of quality watchmaking – but which is better? Both have many cult followings for specific models, such as the Seiko SKX009 and the Citizen Eco-Zilla, but is one brand better overall?

Seiko dominates the Automatic watch segment,
while both are competitive at the Quartz and Solar ranges

Both Companies have made significant acquisitions of other watch brands, so we will only compare watches and technologies of watches branded Seiko and Citizen. This guide compares some popular models in the same price range to each other.

Seiko’s lowest-priced ISO-certified diver (the SKX007) would be the appropriate comparison to the Citizen Promaster Diver; however, it was twice the price of either at the time it was discontinued. In the low-mid diver range, the beloved Seiko Sea-Urchin (SNZF17) has many of the same aesthetic features. Like the Citizen Diver, they both originate with the Rolex Submariner in a style dating back to 1954.

Dial: The Seiko has a somewhat generic dive watch design, whereas the Citizen takes it a step further – with the unique design on the 12, 3, 6, and 9 markers with the chevrons.

Movement: The Seiko has an automatic 7S36 movement – it is self-winding but has no hacking or hand-winding; The Citizen is equipped with a solar-powered Eco-Drive, but has hacking functions for accurate time-setting. The Citizen also has impeccable accuracy, whereas the Seiko movement will gain or lose up to 15 seconds per day; however it has a sweeping seconds hand that 6 ticks per second compared to the Citizen’s one tick per second.

Water Resistance: the Citizen Promaster boasts a professional ISO rating of 200m, while the Seiko 5 should not even be submerged underwater. One is a sports watch and one is a diver – for the same price.

Logo: The Citizen has a very nice and clean CITIZEN logo, whereas the Seiko 5 has a bit of a mess; first the tacky 5 shield, then they squeezed in sports before three more lines of text at the bottom. The Citizen, meanwhile, only has three lines total, making it much more pleasant too look at.

Conclusion: Overall the Citizen beats the Sea Urchin. It’s really not a bad watch, being at the top of the old Seiko 5 range, but this goes to show that among low-priced watches, Citizen is nearly unbeatable.

Two cult favorites on both sides of the aisle – the Seiko Flightmaster and Citizen Nighthawk face off at last. Both are black professional flight watches with slide-rule bezels, quartz movements, GMT functionality, and are nearly the same price.

Main Differentiator: The Seiko Flightmaster has not only a chronograph, but one whose seconds hand beats at 1/5 second ticks, giving it an appealing sweeping motion that is almost never found in a quartz movement. This is matched by the Nighthawk’s unique GMT/dual-time/military-time indicator displayed with plane-hands at the center of the dial.

Dial: Both dials are very busy looking like a plane cockpit while throwing in a chronograph or GMT function as well as a slide-rule bezel.

Indices and Lume: The hour markers (indices) on the Citizen Nighthawk are pronounced bars in a sea of long thin ticks, but is still easy to see where they are. On the Seiko Flightmaster, however, the hour markers are relatively tiny round indices that easily get lost in the sea of tiny numbers as they circle around larger subdials. The lume on the Nighthawk is also considerably better, and is one of the best features of the watch; it resembles a plane cabin when the lights go out and only the essential instrument displays can be seen. The Flightmaster lume is very weak, even by Seiko standards, and just isn’t as good.

Bracelet: The Flightmaster bracelet is barely passable compared to the Citizen’s, which is one of the best bracelets in a watch under $500.

Slide rule: While the Flightmaster’s slide-rule is more accessible because it is on the bezel, the Citizen slide-rule is a bit harder to reach with the right hand, making it a little more impractical. However, the Nighthawk’s slide rule is much more satisfying to play with, as the Flightmaster’s bezel makes me miss a 120-click dive watch bezel instead. Both are impractical for actual calculations because it requires a class to learn how to use it anyway.

Conclusion: The Flightmaster feels like a cool compass while the Nighthawk feels like an expensive flight instrument.

The modern Seiko Astron and Citizen Satellite Wave have similar time-sync technology: with the press of a button, the watches will sync up to multiple satellites and update the time without having to check against anything else yourself. They are near the top of the quartz range of both watches, and are priced accordingly.

These are invaluable for any professional or businessman regularly traveling across multiple time zones, and the choice of which one is better largely depends on what kind of complications you prefer to have. In this case, Citizen has classically jam-packed as many features into the watch as they could, and they market it as a tool for professionals.

The Seiko Astron, on the other hand, has a much more minimalistic and simple aesthetic by comparison, and with less features. Depending on your desired use, either one will suit your need. Both versions are made of an ultra-light titanium to reduce the weight on your wrist.

The top of the Seiko and Citizen range are difficult to compare to one another because they serve different purposes and different markets. On the one hand, Seiko has its increasingly-expensive Presage Basic, Presage Premier, and Grand Seiko lines. The Presage line is tailored towards watch enthusiasts who have likely worked their way up to Seiko’s more expensive models, starting with Seiko 5 and lower-priced divers. The Grand Seiko line often features Seiko’s innovative Hi-Beat or Spring Drive technology, and strives to provide classic Japanese dial designs, as well as a luxury appeal to compete with high-end Swiss luxury watchmakers like Rolex and Omega.

On the other hand, at the high end Citizen doubles down on quartz technology mastery and provides one of the most accurate watch in history with the Chronomaster – a distinctly Japanese High Accuracy Quartz (HAQ) watch. Meanwhile, the Eco-Drive One is the world’s thinnest light-powered watch at 2.98mm thick, which is a substantial engineering innovation in its own right.

Both the High-end Seiko and High-end Citizen are nearly indistinguishable from their entry-level and mid-range models in terms of quality and price, and they start to acquire some classic family resemblances as they target customers with muchos dineros.

In order to become increasingly-competitive with Swiss luxury watch brands, Seiko has recently been capitalizing on the tremendous “value for the money” that it was so famous for, and raising all of their prices. In many cases, they are transitioning classic and beloved models like the SARB017 and Seiko Monster from a very affordable option to one that fewer will buy as they doubled the prices with little to show in the way of improvement.

On the one hand, the market stands ready to propel a new low-range watchmaker to great sales as Seiko prices itself out of this range. However, until then, the comparative value of Citizen is only going up. The question is – what do you get for your money in either watch? With Citizen it is a known quantity. With Seiko – it is increasingly less and less value for more and more  money.